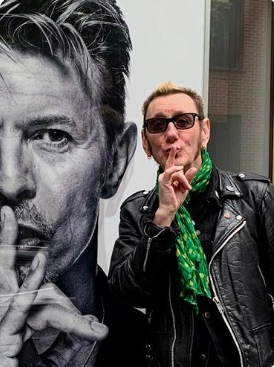 A guest blog by @briantheroomie

I have just found out the lead singer of Eddie and the Hot Rods has died. Heartbroken doesn’t even come close. There are gentle reminders everywhere that we are all living and breathing in world that can be cold and harsh. The poet Samuel Decker Thompson offers that “we are all just a car crash, a diagnosis, an unexpected phone call, a new found love or a broken heart away from becoming a completely different person” Today of all days I don’t want to be a different person. I certainly do not want any more news that leaves me hurt and wanting to cry. I am caught in the headlights, wide eyed and lost to pain, grief and the far reaching impact of a profound sadness.

The song ‘do anything you wanna do’ has been with me all my life, or it feels that way. As a teenager the words reverberated and were like a clarion call. Come with us and ‘be you’ seemed to be the central message. Don’t let ‘them’ tell you anything and make your own mind up. Barrie Masters (Eddie) sang in full roar and his words hit me like a sledgehammer. Eddie had all the charm, charisma and cheek of ‘the artful dodger’ as played by Jack Wild in the 1968 film version of Oliver Twist. On first seeing Eddie and the Hot Rods on ‘Top of the Pops’ I loved them and him with all of my heart.

Eddie had that ‘cheeky chappy’ persona about him. He epitomized independence and had a real working class swagger about him. Long before the Gallagher’s, Eddie rode in with fistful of arrogance and a stage presence to hang it all on. More than that though, he had that tune. It felt like it was written for me, just for me. It suggested rebellion was close to hand and I could be one of the main instigators. The central theme to the song was concerned with ‘self’.

Years later when introduced to the writing and thoughts of Carl Rodgers it seemed to me Eddie had been heavily influenced by psychological theory. That ‘do anything you wanna do’ embraced the notion of self-actualization was not in question to me. From that moment social work and rock and roll were inextricably linked and intertwined. I had fallen in love with music and here I was about to give my heart away all over again.

The Greek philosopher Plato observed that music is a kind of moral law and that “it gives soul to the universe’ and this in turn can allow us to fly from this earthly realm and imagine an existence where anything is possible. Baudelaire (1857) takes this one step further in stating “music fathoms the sky”. One might think all of this to be rather fanciful and too idealistic. However even Pythagoras maintained that there was a certain geometry to the noise strings make and that “there is music in the spacing of the spheres.

Greicius (2017) argues the universe is alive with sound and that at its heart is a rhythm, as every night, our sky beats with the pulses of radio light waves, most of which go unseen. This would suggest we are surrounded by percussive back beats and these are an everyday part of the natural world. One could therefore assume there is a very real connection in terms of the effect this has on the human condition. Levitt (2019) asserts the spiral in a snail shell is mathematically equal to the spiral in the milky way. He further argues this ratio is the same in human DNA. Furthermore it is manifest in music that ‘transcends cultures all over the world.

When considering my own practice I would argue there is an inherent bias toward the arts within social work as much of what we see and observe is the basis for what we do next. Music seems to offer a unique way to both engage and give us insight of the lives of some people. Hannu (2107) argues that within some “social work practitioners experience, there is a wealth of evidence to support the idea that music can reach people in quite a profound way. This would sometimes negate the need for words. This might then be a manifestation of people telling their own stories without the need to provide elaborate personal detail in relation to what they might feel to be a very personal and painful narrative. In one sense the music itself becomes the voice, as for many of us the relationship with the sound or words is in itself an expression of our own inner being.

Music as a tool can be widely used in the fields of both social work and health and social care. Sacks (2007) explore these themes further and asserts that music “can tap into “long-buried memories” and also help people move from their existing situation into a feeling of the familiar, thus making it an especially  “valuable tool in the treatment of aphasia, Parkinson’s disease, and dementia”

There is something in offering ‘art therapies’ alongside some of the more ‘talk’ based approaches to intervention. Art can offer the opportunity for a more expansive discussion as it allows for a broader understanding of the person within their own personal narrative. When one considers choice of music and the link with how people interact with the world and in what way they then position themselves when considering certain songs, the discussion could be freer flowing and provide an invaluable insight into another person’s life.

From a right based perspective this approach sits well within an anti-oppressive discourse and intervention, in that it is important to recognize that  social workers see people that are being supported as having their own unique history. It also starts from a point of establishing a positive understanding of strengths, choice and independence. The dialogue regarding arts and music could equally give the worker an understanding into how people self-define when considering culture.

If one needed evidence of music as complimentary mechanism for relaying one’s personal narrative then Radio Four, Desert Island Disc’s is exemplary. Guests are invited on to the show and guided through an interview where ” they explain their choices and discuss key moments in their lives, people and events that have influenced and inspired them and brought them to where they are today” BBC (2019) This all starts to sound very familiar from a professional social work perspective. Life stories and personal testimonies are central in establishing identity as well as exploring processes for ‘positive change’.

Christine Stevens (2009) examines the notion of ‘healing through music’ and claims that we are biologically wired to rhythm and we can’t hold still when a good beat is playing. Judging by some of my own recent public performances I would agree as I have a lifetime subscription to ‘Dad dancing magazine’ or would have if it existed. More importantly studies evidence that drumming and percussion can aid the immune system and there is a school of thought that would offer it can counter burn out. Stevens also argues that this approach to art based therapies can alleviate mood disturbances and give temporary respite from chronic pain.

When one considers the potency and impact of art it would seem sensible to view it as a tool to expand our limited understanding people’s lives. People’s loves, wants needs and desires can be writ large through the voice or music of another. Equally their fears and negative life experiences can be represented through this medium with little recourse for the person themselves to actually say anything.

When I starting typing this it was to remember Eddie and his Hot Rods I wasn’t really expecting to discuss art based therapies, right based practice and social work. However if music or art has relevance to the person we are supporting then why would we ignore what could us invaluable insight in to another human being. If Eddie is offering liberation through self-actualization and we can use this approach to support practice development then who am I to disagree, To quote the man himself “do anything you wanna do”

One reply on “Do Anything You Wanna Do”

I empathise with you Brian, you can hear him scream, “Don’t let folk guide you, do what you think is right!” Folk don’t own you, you own you!!!