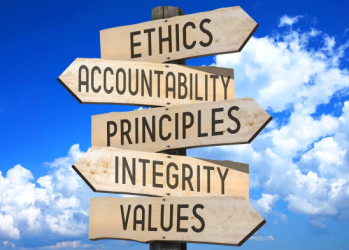 Conflict between the lived experience of practicing as a social worker for a social work employer and trying to fit in to the bigger organisation with your social work values is possibly a big source of stress for social workers. Social workers are employed by lots of different types of employer. Housing associations, community health trusts, charities, inspectorates and regulators, hospitals including private treatment centres. Each with different priorities, accountability and ways of working. You won’t know what the cultural norms are until you start.

Social work is a global profession, with a shared, global definition. Through embracing the power of collectivist action, social workers can positively influence employers and reshape organisational culture to fit with social work values. Social work’s mission, as described in the British Association of Social Workers code of ethical practice, is to uphold respect for the inherent dignity, equality and worth of all people. Social workers can live this mission by encouraging their employers to recognise positive obligations to base practice around the United Nations Declaration of Human Rights (1948). Social workers who are encouraged by employers to promote social justice, through upholding the natural rights of the individual, and through taking positive action to strengthen families and communities will give back far more than the basic job description requires.

Social workers are natural agitators for positive change, whose values have public service running through them like words in a the middle of a stick of rock. And the Courts are encouraging social workers to remember and reclaim their unique contribution to public service:

“The Local Authority is a servant, not a master… vulnerable adults… do not seek to be ‘controlled’ by the State, … ‘working together’ involves something more, much more, than merely requiring carers to agree with a local authority’s decision even if, let alone because, it is backed by professional opinion” (Munby, 2011).

The contentious point for social workers is that you can only be a servant not a master if your employers supports you to be able practice in a way which enables you to spend time with people, taking all practicable steps to find out what they want from you and why. Working for a social work employer with a relational and rights-based ethos makes it much easier to live the values of an ethical practitioner than being in a highly ridged care management environment where your core function is to broker packages and move the person on to the next setting as quickly as possible.

Rights-based employers encourage what O’Donnell et al. (2008) termed as being a form of ethical activism. Ethical activism is a more radical approach to social work, with social workers positioned as being more than allies working within a network of support around people, but rather assuming the role of accomplice in subverting the status quo enough to disrupt and effect positive change.

You will know if you are working for a social work employer whose cultural norms support rights-based, ethical activism if you find yourself in the middle of ethical deliberations with people, their families and/or carers and other professionals on a regular basis. Usually over a cup of tea, reflecting on how the week is going, ethically activist social work employers have a culture where every day brings a new debate about the ethics of any given intervention or approach, always centred on upholding the rights of the person social workers are supporting. Ethically activist social workers respect autonomy as the first principle to uphold in practice (Gillon 2003), upholding people’s wishes and feelings through tackling oppressive power dynamics which push for unnecessarily disproportionate, restrictive interventions.

An example of the type of disproportionate, restrictive practice ethical practice avoids, can be observed in the ruling on the Wye Valley NHS Trust v Mr B (2015), which was about a 73-year-old gentleman with a long history of mental health needs and poorly controlled diabetes. Following the death of his partner, Mr B lived on his own. He developed a leg ulcer, which did not heal over time, leading to a hospital admission in 2014. During a long stay in hospital, Mr B resisted treatment for his diabetes and his ulcer which led to his leg becoming seriously infected. In 2015, the NHS trust who were caring for Mr B applied to the Court of Protection asserting that Mr B needed to have his leg amputated to save his life but lacked the capacity to make the decision, so they wanted Court authorisation to proceed. The evidence presented to the court made it clear that Mr B was likely to die within days from the infection if not action was taken, however if his leg was amputated, he had a positive life expectancy in excess of three years. Most people just remember it as the Wye Valley case, forgetting Mr B, the appellant. However, Justice Peter Jackson did not make such a crude error. Entirely centred on Mr B, and his views, the ruling upheld that whilst Mr B lacked capacity, this did not negate his known wishes, feelings, beliefs and values. In paragraph 11 of the ruling Peter Jackson noted that:

“This is not an academic issue, but a necessary protection for the rights of people with disabilities. As the Act and the European Convention make clear, a conclusion that a person lacks decision-making capacity is not an ‘off-switch’ for his rights and freedoms. To state the obvious, the wishes and feelings, beliefs and values of people with a mental disability are as important to them as they are to anyone else and may even be more important. It would therefore be wrong in principle to apply any automatic discount to their point of view.”

Given these considerations, the Judge ruled that it was not in Mr B’s best interests to undergo an enforced amputation and ruled against the NHS Trust. This is what makes the Wye Valley case ruling so important for social workers, this emphasis on the person’s wishes and feelings when constructing a best interest decision. It is a simple message; the person’s views are central. Ethically activist social work practice centres on respect of autonomy.