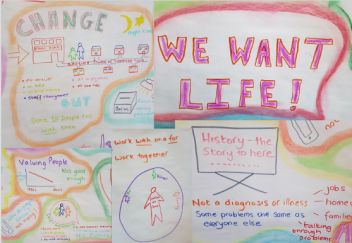 Firstly, if you haven’t read Mark Nearys fantastic book ‘Where Have All the Milkmen Gone’ then we think that’s a good place to start. Mark totally gets it when it comes to social work for Steven. He doesn’t want someone who thinks they know Steven and Mark better than Steven and Mark know themselves. He doesn’t want an admin officer for a social worker or someone who can broker care (although he does want the awful bureaucracy removing!). Mark doesn’t want someone who can interpret other professionals jargon. Mark isn’t looking for a mate for him or Steven. Nor is he looking for someone to relay decisions made by the great and good at panels in locked away towers. Mark wants someone alongside Steven. Someone batting for him. Someone who when Mark isn’t there is absolutely going to advocate for his sons wishes, feelings values and beliefs in a way Mark knows Steven wants. Crucially, Mark and others, want someone on behalf of the state (Local Authorities  or NHS – it shouldn’t matter) who totally get and love the fact that Mark and Steven love each other. The thought of standing in the way of their relationship should be as abhorrent as the feelings generated when you hear Mark talk about those who separated Steven from his dad. Whether it’s the principles of the MCA, the Articles in the UNCRPD or the Well Being principle in the Care Act, the overriding ethos is that the state should not interfere with the family life. Our role is to promote it, protect it and if possible to enhance it… And then get out of the way very quickly!

However it still looks like we are a million miles away. More evidence is coming to light of the routinised institutional nature of human rights abuses which are taking place in the name of so called care and treatment.  #underlockandkey was the latest in a series of reports on what is becoming an all too familiar story of families heart breaking distress.  There is an ever expanding list which is compelling and which identifies consistent themes including:

So, we change the size of our institutions from big asylum to small group home, and the uniforms are all but gone but the practice is frozen in time.  We continue to debate about how it isn’t enough to just build new types of institutions  – and we agree that a bigger shift is needed in mindsets if learning disabled people are to genuinely experience their full range of their human rights. Medical training still appears to over emphasise that clinical autonomy is the more important in decision making than the views of the person.  This has to change. Social Work training is grounded in human rights and individual autonomy. Socoal Work could potentially be the challenge needed. Since the early 1980s we’ve been talking about Social Workers becoming a named person providing advice and advocacy for people.

So many people have a named social worker and have done for years. But what’s changed?

Whether we are named Social Workers or not we are in the heart of a culture which families who are brave enough to speak to the press about their experiences are telling us is immersed in the ways of the old institutions. We no longer chase the doctors coattails, walk along wards or dormitories in large Victorian buildings but are we still effectively perceived by people and their families as still prowling the corridors, ensuring compliance and often crushing the hope they have of a loving family life.

The  Department of Health’s vision for adult social work  is the most recent attempt t0 define a role for a Named Social Worker. 6 Local Authorities are piloting the role as describe here – https://lynromeo.blog.gov.uk/tag/named-social-workers/

Social Care Institute for Excellence are reporting here on the outcomes so far from the pilot http://www.scie.org.uk/social-work/named-social-worker.  It is still early days,  but from our involvement this feels like something important is being tested.

Self-advocates have told us that they want their Named Social Worker to be there for them. They didn’t see the social workers in the heroic role of fighting medics to prevent admission to an ATU. People with a learning disability that we support don’t know what an ATU is right up until the point where the options have been exhausted, the ‘risks’ seemingly too great and the door locks behind them. The people we spoke to wanted a social worker to be, well, a social worker. The kind of social workers we think social workers want to be; a really good one. One who can speak about love without feeling embarrassed.

For ‘Named Social Workers’ read ‘good Social Workers’ or moreover,  Social Workers who are legitimised to be exactly what they have trained to be compassionate, kind and on the person’s side. Social Work has a unique role and position within the system and it is designed to be the safeguard against people being marginalised. Social work is steeped in an education of social justice, empowerment, human rights and an unequivocal and unashamed approach to helping people to remain as independent as possible and close to the loving support of their families and friends. Ensuring that is our unique role. The only safeguard that is needed is to keep people safe from the system intervening into family life. Whether social workers are ‘named’ or not, they need to be really good social workers regardless.

One reply on “The milkmen of human kindness”

We have named social workers already, they are Adult Social Services Managers albeit they do not need to be qualified social workers, and even if they were it would make no difference, as they are not autonomy, but act under strict prescribed roles, top down policy and care pathways. .

This latest initiative, appears a sop to individual care, but merely facilitates the removal of LD/autistic from public, and now judging by the Dispatches programme, charitable mental hospitals, to those, mainly two large monopoly corporations, owning ‘community living’ ie either those owned by US Acadia or Universal Health Services, who now have provision in most local areas.

These providers have their own mental hospitals where residences in their community living, can be sectioned to under MHA or ‘best interests;’ MCA at any time, and if you read my blog finolamoss their treatment is the same as St Andrews.

So this appears to be a turf war for these very lucrative commodities 12,000 in secure unit a week 900 a night on average and £4500 average in supported,. independent/ community living.