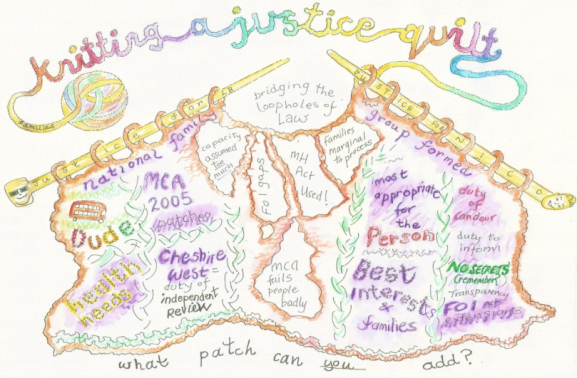 Image is Knitting a Justice Quilt by Mary O’Toole

This blog is in support of the second week of #7daysofaction in October 2016 – see https://www.sevendaysofaction.net/

We decided to become Approved Mental Health Professionals as we felt an anger deep inside which just wouldn’t go away.  Faced with daily experiences of people’s human rights being ignored and in some instances abused we felt that we had to do something. We are social workers who are working with people with a learning disability and these are the things that made us angry:

If you think we must be exaggerating, just take a look at this summary of findings reported in the Lancaster University Centre for Disability Research Briefing Paper about the first #7daysofaction in April 2016 – http://wp.lancs.ac.uk/cedr/publications/7daysofaction-2/

Here is an example of where you might see some of these issues in your practice as a social worker. Imagine that you have been asked to support a person who has been detained under a Section of the Mental Health Act in a hospital 100 miles from their family.  The person is described to you by the doctor who makes the referral as having a ‘mild learning disability’ (what does this actually mean?).  When you make contact with the person, you find out that they have been locked up in a hospital for  over 10 years.  As you ask more questions you start to find out more things which at first worry you and eventually start to make you angry about their rights.  You find out that had they been convicted of a minor offence for the reason which they are detained under the Mental Health Act for, the conviction would have been spent by now. They have had regular MDT reviews and Tribunals, yet despite all this professional intevention nothing has changed since they were first detained. They are on a concoction of psychiatric medication to stop any natural behaviours, feelings or emotions sneaking out. They are deemed to be a continuing high risk by the clinical team and they recommend a lot more work before they are ready for release. In practice, this means they attend a course 1 day a week which involves taking a walk around the grounds. When you meet the person face to face you find that this person who the forms describe as being highly risky is intelligent, articulate, shows insight into what had happened and why.  They ask you why they can’t go out more, be closer to their family and prepare for leaving the hospital and moving on. They sum up their circumstances better than any of the ‘professionals’ involved – ‘I’m 30 and I’m spending the best years of my life in here with people I don’t want to be with, away from my family, for what reason?’

Sometimes visiting people in an ATU feels like we are back in a school classroom, sat in the science lab, watching experiments in action with the staff in the units waiting for a eureka moment before they will let the person go.  But these aren’t experiments, these are real people living real lives.

We decided that to try and combat some of what we found.  So that we could work to promote people’s rights we decided that we would go back to University and train to become AMHPs. Lots of people have told us along the way that they couldn’t see us as AMHPs.  They thought that we would struggle with the potentially oppressive powers which we would hold as an AMHP interpreting caveats to human rights which for over 200 years have been dominated by the views of doctors applying a clinical/medical lens to people (Kinney 2009).  They thought that being an AMHP would feel to be too far from what social work values stand for as they thought that AMHPs were about making compulsory detentions and admissions to hospital happen to manage perceived risks (Buckland 2014). We don’t agree. We think that being right in the heart of decisions, challenging the medical view of people being a risk to themselves and others, gives us the perfect starting place to prevent significant injustice by advocating for and upholding people’s rights, challenging assumptions, oppressive and risk adverse practices.  It means we can get involved in looking for alternatives to give people a chance at living the life they want to live.

Our experience is that people really struggle to understand the legislation.  The Mental Health Act Code of Practice is explicit in stating that all decisions must be compliant with human rights legislation.  Understanding is particularly poor of the Mental Health Act (1983) (amended 2007) and its interface with Mental Capacity Act (2005) when someone lacks capacity but doesn’t actively object to the detention (or where because the person has a learning disability professionals assume they lack capacity to make a decision that professionals deem to be ‘wise‘). The Act wasn’t designed to control people (who knew!) and the guiding principles should always be the starting point, for both the MCA and MHA and these aren’t hard to grasp. Whilst many AMHPs rightly highlight the practical problems that go with being an AMHP, we were more concerned with where people’s rights are within this process.

Challenging this system isn’t easy, it’s powerful.  But whilst detention is the ultimate infringement of someone’s liberty, it shouldn’t mean their rights, wishes and feelings are pushed aside. So with that in mind, we are more determined than ever to bring a right’s based approach to mental health, learning disabilities social work and any other social work we get near!

Training as AMHP’s is one of the best decisions we’ve made and we want more people to join us.  We need a rights based approach which upholds human rights, and being an AMHP is central to upholding this.

3 replies on “To AMHP or Not To AMHP”

I remember having the same conversation with friends years ago when I was deciding to become an ASW. In my case the motivating factor was promoting the rights of people with dementia which were detained ‘de facto’ in hospital. It’s good to know that there are still social workers who recognise that the legal frameworks can (and should) be used to empower people & to ensure that their human rights are not breached.

And yet if you have a mental illness (and no learning disability) which results in you being a risk to yourself it is incredibly hard to get a bed, and even if you manage to get one everyone is keen to stress that they can’t actually keep you safe……

[…] Having been involved in both stages of the pilots over the last two years, it feels like this is a small but important outcome.  Verification that relational approaches secure better outcomes when backed up by legally literate social work case based reasoning which upholds the inherent dignity of all human beings.  The best outcomes, however come when the social worker sees their role as being one of fighting to uphold the person’s human rights and secure the adjustments they need to their environment and social networks.  These social workers see themselves as being armed with the power of justice and understand it is their job to wield their power with care in defense of the person so that their voice is heard, their wishes and feelings understood, and they are able to regain control and dignity in their lives.  Social workers who know when to use their power and when not to do so. […]